During a past life regression, a female client experienced her life as a little boy. His main occupation was playing with toys. One toy was so insanely dangerous that you might wonder if she was making it up. However, I did my research and can confirm that it's a true vintage toy! By finding the toy, I could estimate the year of her past life to be about 1843 A.D. There is no way that my client ever heard about this toy prior to her session, which lends support to believing in this past life. But, you can make up your own mind when you read this short clip shared with permission.

A charming Denmark city laid nestled in a valley, decorated with spruce and fairy lights. Music permeated the air as a band and choir strolled the streets. Lots of things were planned for the Christmas fair like games, candies, food, and hot drinks.

Meanwhile, a boy played with his toys on a wooden floor in front of a warm fireplace. Little Thomas wore leather sandals, pants, and a tunic the colour of nature. His short, dark hair glistened by the flames. In his imagination he moved a small, wooden train. "Feeling dizzy," he said.

Cynthia: Maybe you'd feel better with something to eat. Let's leave the living room and go into the kitchen for some food. What are you eating?

Cynthia: Is there anyone else at the table with you?

Thomas: No. They are busy working, building, and doing carpentry. Papa is making toys out of wood. I see Papa turning one in his hands while he is working on it. He's proud of his work. Mama is sewing small clothes for the dolls. They are going to sell them at the toy store.

Cynthia: Do you have any brothers or sisters?

Thomas: They are not here. They are at school. I am the youngest.

Cynthia: What do you do with the majority of your day?

Thomas: I play with my toys. Sometimes I paint one. Papa says I have to be careful. My parents own the toy store down the street not far away. I like going there and to the candy store next door.

Cynthia: Then let's leave the kitchen and move to the toy store. What do you see?

Thomas: I see lots of toys of different kinds. There are some toys I can't touch. They are for the rich. They are made of metal, highly polished and pretty. Not like mine, which is basic. But we are happy and smiling.

Cynthia: Is it a busy store?

Thomas: The store isn't opened yet, but soon. Papa is happy today, because a holiday is coming and there are lots of toys to be sold. It's a special time of celebrations.

Cynthia: Is there something you want to play with when your parents aren't looking?

Thomas: (Soft chuckled) I want to play with the steam engine. It moves when there is a fire in it. It's made by Papa's friend. They are new steam engines and very expensive. It's a popular toy among the rich, which is good Papa says. Mama just laughs. I like to watch it move and put little bits in it, but they are afraid that I will get burned.

Okay, there is a lot more to this past life, but for this Blog we're ending it here to show you the train that little Thomas was talking about -- the Model Dockyard Locomotive created by the Stevens Company in 1843. It was one of the first toy trains that children could move. It was also before train tracks came with toy trains. The Model Dockyard Locomotive had a real engine that was propelled by steam. Children had to pour kerosene or alcohol into the train and then light it with a match. The toy had the nickname "Dribbler or Piddler" because it leaked the liquid you put into it all over the floor! Lovely. So, be grateful that we live in the age of Consumer Affairs. Merry Christmas, Happy Hanukah, Joyful Kwanza, Las Posadas, Winter Solstice, and any special day you celebrate. 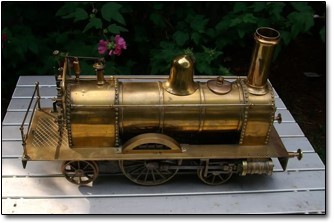 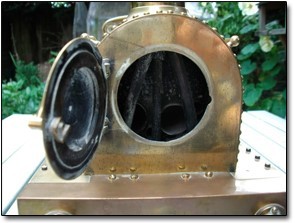 By accepting you will be accessing a service provided by a third-party external to https://cynthiafey.com/